I had a conversation with some friends about the programming languages different companies use. Many companies only choose the most popular language such as Java and C#. They believe "Developers can write clean code in any languages" so just pick one which has the biggest resource pool to make hiring easier.

However, clean code is the key for a technology company to succeed. It provides the company to maintain a fast pace for its delivery. Companies who limit the languages don't realize that they might be losing the speed of delivery, which can be measured by four key metrics.

What decides the level of clean code?

The good code is working code (pass all the tests) with very good readability (reveal intentions) as well as least elements (no duplication). The good code also allows the reader to exit early so they can understand the code quickly by reading the minimal amount of information.

We have been trying to achieve that for decades. Many frameworks, libraries, language features (I’ll call it “styles” in the rest of the article) have been introduced for this purpose to allow developers to write less and clear code for more things, to separates the concerns of different levels of abstractions.

However, we have a problem that all of the styles are contextual. If we use a low-level style (close to computer interaction such as copying an array from memory A to memory B) to solve the high-level problems (close to the real world such as generating an invoice), the code is very hard to be clean. But if we use a high-level style to solve the high-level problems, we can write much cleaner code easily. So it’s all about putting the right styles in the right places. The more styles a programming language provides, the higher chance to have clean code. But there is also a higher chance to have messy code as well if we fail to choose the right styles.

So many people think the level of clean code totally depends on the developers.

Is that true? Do languages have no contribution to clean code?

I choose 4 languages as examples, but keep in mind that there isn’t a language that supports all the styles (no language rules all):

So the relationship among clean code, developers, and languages look like this: 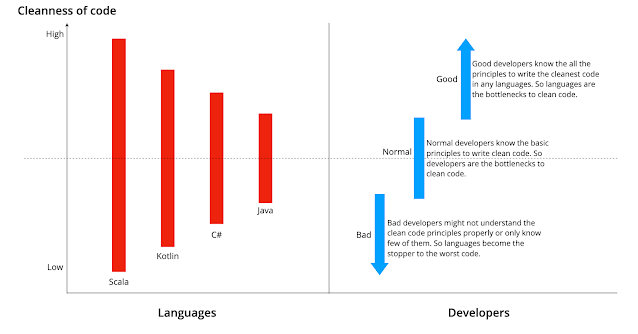 By the way, good developers also try to extend the language to support the styles they want until it’s too hard, then they create a new programming language. Many new languages die because they couldn’t fit the purpose. Only a few survive with a strong community and its ecosystem. They can normally be safely chosen for commercial use.

Be careful about choosing a language for learning purpose

Trying new languages in a long-term system is dangerous. Writing clean code in a language requires a certain level of proficiency in that language. It takes time to learn. We should practice the new language in coding dojos first, then experiment with it in some short-term products or very simple products which you can rewrite within a week by your mastered language.